Lost and Found Forever in My Heart 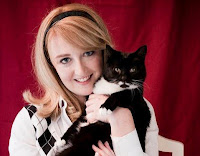 "It happens. People make mistakes….it's the part that comes after that matters. The part where you make it right." Lexie Grey from 'Grey's Anatomy'

My cat Chloe was lost for exactly 31 days, three weeks after I adopted her. From the first time she licked the tears from my cheeks, I had known inside my heart that we had bonded for life. Of course, I knew absolutely nothing about having a cat as a pet and knew even less about looking for a lost cat. Of course, I learned quickly and became a better person for the lesson and the experience.

At first when I was looking for her, I thought she would immediately come to me or I would find her. I lost her at the Vet and wrote down my number on the back of an old receipt to the  people who lived next door. I was frantic but wondered if maybe this was a blessing in disguise. It wasn't until I walked into the house and she wasn't waiting for me that I decided to try. 2010 was the first year for record levels of snow but it still didn't stop me. Instead of wearing my ski outfit on the slopes I wore it waiting for Chloe. Trust me, no matter where you are depending on the snow and how cold it is outside, ski gear is the BEST!

The first house I went to I ended up bursting out in tears explaining how she was my best friend. From then on, I was officially on a mission. On weekdays after work from 5:00 to 10:30 PM at night I waited in a dark desolate trail calling for her with a trap or food or both nearby. I had four people in four different sections of the area on 'Chloe Watch' and would drag out my friends out so we could divide and conquer. On the weekends I would be able to be there for most of the day.  After a month and a day, it was the neighbor who lived next to the Vet who had saved the receipt and my scribblings that had let me know he had found my cat.

My good fortune was that I got a second chance with Chloe or my 'Miss Chloe' as I refer to her now. I was granted a second chance to appreciate her company and most importantly how to take care of her the RIGHT way. For anyone and everyone who ever lost an animal, it is a horrible experience. An experience that could only be multiplied by a billion for anyone who has lost a child. For any Pet owner, I hope that they never have to go through it but just in case you do you are not alone.

By the end of the experience looking for Chloe, I learned how much I was willing to do for her or for someone else, how to earn back another persons trust, and finally, how to successfully catch a cat. Below is a small window of insight from the five pages tracking her movements and the many elements that I learned to build trust with one person to another.