Be Your Own Valentine 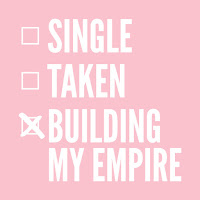 "The ultimate lesson all of us have to learn is unconditional love, which includes not only others but ourselves as well" Elizabeth Kubler-Ross

I knew I didn't want to spend another Valentine's Day alone. I e-mailed all of them and told them to come to my apartment. To make and bring over their favorite chocolate recipe. Beverages would be provided by me. I bought Cosmo mix, wine, and lot's of sparkling Champagne.

We ended up drinking Cosmopolitan's, eating chocolate, watching 'Sex in the City' episodes, laughing and sharing dating stories. The next year my friends who were in a relationship wanted to join us. My Valentines Day party began at that moment and become a yearly tradition.

A Sophisticate does not feel sorry for herself on Valentines Day.  She makes lemonade from lemons. If  she is really lonely, she invites her friends over to celebrate. Valentines Day is a state of mind. It was created to sell cards, chocolate, and gifts.  She waits for someone who loves her a great deal and does not settle for less. While she waits, she makes the most of being single. She recognizes, respects, and appreciates the love that she does have in her life (See 'A Sophisticate Loves Valentines Day').

A Sophisticate is a romantic. She loves herself first. Therefore, whether she is  in a relationship or single she is always her own Valentine.

'Be Your Own Valentine' was the second blog I had ever written. This blog is the first revision since it was originally published. The message of being your own valentine was what part of what inspired me to start my 'Sophisticate in the Suburbs' blog.