A Sophisticate in the Suburbs 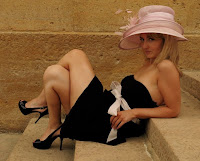 "The suburbs are the American dream, right? Living in a nice house, having a good job, a happy family" Cheryl Hines

When I started my blog, it was originally going to be  called 'Single in the Suburbs' and it was going to be about a single girl who grew up in New York City who moved to the suburbs. All of my blogs were to be my observations and adventures living and being single in the suburbs.

Being fortunate enough to go to Villanova University I was exposed to true sophistication in the suburbs first hand. When choosing a college I wanted to be near a city but not have to experience it. When I first arrived on Villanova's campus, I noticed a young woman jogging. She looked healthy and seemed free and happy with no fear of being in danger. Like when I lived in Nashville, Tennessee I was amazed on the beauty and quiet of everything around me. I instantly fell in love with not just the school but the town around the school as well.

When first living in the suburbs the first thing I noticed was space. There were no sidewalks and there was so much space between stores and houses you couldn't walk anywhere. Also, unlike the city most places in the suburbs to dance or have drinks are hidden on side streets and behind what is necessary or practical.

What makes a Sophisticate in the suburbs? The ability to breathe and relax. The freedom to be herself and hear herself think.  In the suburbs, there is a certain freedom that the city cannot afford. A Sophisticate can breathe in fresh air, smell and grow fresh flowers, and enjoy the luxury of having a picnic on the fresh grass of her own backyard.

In the suburbs, a Sophisticate can take her child to the playground. Her children  have the freedom to be young and naive with no fear.  A Sophisticate can go running or go for long walks being able to see beautiful houses, manicured lawns, and can believe for a few moments that life is perfect. Life in the suburbs is having an ice cream cone while strolling down the street with friends or family.

There is no rush, there is no traffic, or loud noises. The only noises you hear are the lightening bugs  and dogs barking. In the suburbs a Sophisticate has the freedom to be kind. Getting to know her neighbors only helps her. A Sophisticate is allowed to be her naturally friendly self.

In the end, a Sophisticate in the suburbs is free to be herself. She is free to relax and smell the roses that grow in her own backyard. ;D