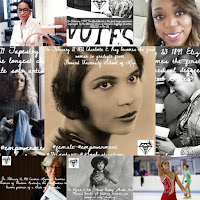 Women's History Month began in 1981 (Womens History Month Origins) when Congress passed Pub. L. 97-28 which authorized and requested the President to proclaim the week beginning March 7, 1982 as “Women’s History Week. It wasn't until 1995 that it was an entire month.

The women that made history did not make history to say "I was the first woman..." They made history because they had desire, determination, purpose, and ambition. They wanted to succeed or lead because they knew what they were meant to do and nothing was going to stand in their way.

How do I know? When I was little I discovered a book at the library on women's history. Beyond Charlotte's Web it was the first "adult-like" book  I ever read. It was a 200 page book with quick biographies of women who made history. Biographies that were two to four pages each include Pocahontas and Elizabeth Blackwell, the first woman to receive a medical degree. None of the biographies I read at that time or since have had the words "because she was a woman". It was "because she wanted to fight, to study, to achieve, and do what she felt was morally right."

Sometimes I hear about the lack of role models in reference to celebrities. Celebrities are not meant to be role models. Celebrities become role models but role models can be found everywhere. unfortunately being good and kind are not fashionable and history, especially women's history, is not taught unless as an elective in college.

Since women's history is not taught unless as an elective in college a Sophisticate must continually look to the past, to other cultures, and into making  history herself.

Learning about women in the past helps a Sophisticate understand what she has the capacity to do in the present and in the future. That is the point of Sophisticate in the Suburbs. The idea is to make charity and kindness cool. It is about celebrating imperfections and the encouragement of being unique. .

My interest in women's history and empowerment started the moment I picked up that book as a child and evolved into my passion as adult to lead me to write Sophisticate in the Suburbs.

"You mean impassible. Nothing is impossible" from "Alice in Wonderland' (2010)

My passion is to communicate and promote facts about women history that others may not have the time to teach. The goal of Sophisticate in the Suburbs is to inspire, motivate, and teach women of today that because of the women of yesterday nothing is impossible.

Everyday I post about Women's History. The hashtag I utilize is #21stCentury #Sophistication. The idea I hope to communicate is that it doesn't matter what century a woman has made history in, because whether it be in the past or present women make history to shape the betterment of our global society and shape a global culture.

#TodayinWomensHistory is not about yesterday, it is about today. in the end, it is about women making history every day past, present, and in the future. ;D