A Sophisticate in DC: Alexandria, VA 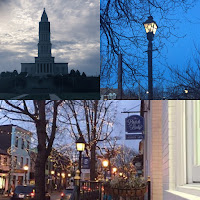 When I got the job in Washington D.C. I a friend of mine recommended two places. One was someplace in Maryland and the other was Alexandria, Virginia. My goal was to move down South so there was a choice between Maryland and Virginia, I was headed to Virginia.

Alexandria Virginia was a vital seaport during colonial times. Alexandria is George Washington's hometown and part of the original Washington, DC. Thomas Jefferson  entertained guests and Civil War general Robert E. Lee moved to Alexandra with his family when he was only four years old.

Alexandria served as one of the largest trading ports prior to the Civil War, but once occupied by Union forces from the onset of the Civi War, the city was both vital in the defense of the nation's capital and essential in the war effort as transportation and hospital center for the Union.

Even before he war, Alexandrians were making history toward achieving equality. The Edmonson  sisters became figures of the anti-slavery movement after they tried to escape Alexandria and were caught in 1848. Their story sparked a national controversy as activists struggled to free them. The founder of Alexandria's Apothecary Shop, Edward Sabler, was also a famous member of the anti-slavery movement, as he used his own money to buy slaves, and then grant them freedom until his death in 1831.

In the 1930's, famed Alexandria African-American attorney Samuel W. Tucker was one of the key artifacts of the Civil Rights Movement.

Alexandria's Old Town district was established in 1946 as only the third historic district designated in the United Sates. Its remarkable concentration of historic buildings with a detailed past create a rich backdrop for today's vibrant contemporary lifestyle (from Visit Alexandria)

Today's contemporary lifestyle from what  I've experienced is really nice. The area has the southern hospitality that Charleston, South Carolina or Savannah, Georgia offer with the taste of my old home town, Wayne Pennsylvania.

If Washington, DC is the gateway to the South, Alexandria, VA is the entryway to southern hospitality.  Like DC, all that you see it not all that exists. Old Town or King Street is similar to DC were being political is essential. A place where secrets exist in high class modern day speakeasies.

There are cute coffee shops, cobble stone walkways and lanterns that make you believe you are in a place that is ten of the century. Yet,  modern day shops like Banana Republic and Anthropologie exist to keep the residents on the cusp of high fashion and style.

"Vain trifles as they seem, clothes have, they say more important offices than to merely keep us warm. They change our view of the world and the world's view of us" Virginia Woolf, Orlando

The style here can be described as high end fashion with a dash of country chic. For women, it means high quality boots throughout the entire year. In the winter, it is a black cashmere turtleneck sweaters with an expensive necklace with a black North Face jacket, with L.L. winter waterproof boots. The make-up meticulous, with hair cuts that are straight and chic.

In essence, Alexandria encompasses all the beauty of the country and the past  with the shine or sparkle of today's northern city sophistication. Alexandria  has the classy high end personalization of  Nantucket or the Main Line in Pennsylvania with Vietnamese and Indian restaurants and fashion but the warmth of southern hospitality.

In the end, Virginia is for lovers and a Sophisticate is Alexandria is a lover of southern hospitality who is on the cusp of fashionable country city chic. ;D