A Sophisticate is Jem 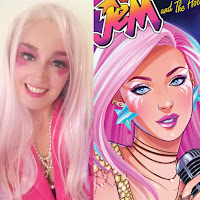 Those words I heard these words echoed every morning before I went to school.  At the time, they didn't really mean anything. During the week I watched Jem and the Holograms and on Saturday mornings right before school.

It was a great cartoon to grow up with as far as a fictional role model. A female CEO of a record label who turns into a famous creative talented singer who has an all girl, that is full of diversity without the diversity being emphasized only appreciated. For all the women in the show, including the villains  men were just support or icing on the cake when all was said and done.

Fast forward, my decision to be Jem of Jem and the Holograms for Halloween was so seamless that I don't even remember the moment I had the idea. While I was working life coach Andy Kostow I realized that my excitement was more than for a costume, the idea for my costume meant more. 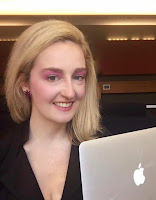 My personality versus my alter ego of Sophisticate in the Suburbs were slowly been becoming one. I realized this costume was symbolic of me becoming my alter ego.

Maybe it was the movie "Jem and the Holograms" or rather the music from the movie that gave me the idea. The song "The Way I Was" resonated with me as a result from the changes that have occurred over the past two years. I've been growing as a person and growing into the person I imagined. Music helped helped me turn into Sophisticate in the Suburbs, like music turned Jerrica Benton into Jem.

It made sense. Jerrica Benton was blond in business feminine, tough, and insecure. She had an alter ego that was daring, confident, and fearless. My rediscovery of Music Row, my alter ego of Sophisticate in the Suburbs, my love of pink, my singing lessons, and the fact I ended up working in business. Everything pointed to the fact, whether I realized it or not, in some small way I grew up to become Jerrica. Both Sophisticate in the Suburbs and Sophisticate on Music Row helped me turn into Jem.

Living in DC I have come to the conclusion I was different. Instead of conforming, I decided and become firmer in my resolution in staying true to who I am. When in Rome, doesn't apply, at least to me. As I shopped for my Jem costume, I explored more of who I am. Allowing Jem and Sophisticate in the Suburbs more and more into one person instead of a separate alter ego.

The other discovery I made was that in the 80's no one had pink hair. They talk about the uniqueness of fashion during in the 80's yet now uniqueness is common. Uniqueness in fashion and personality is common.  Even something as minor as blue eyeliner didn't exist. Finally, the concept of Synergy from the cartoon also was cause for me to consider. Synergy is now Siri on my iPhone and laptop. I can talk to my laptop to give me what I want. Unfortunately, technology has not reached what can be found in Jem and the Holograms.  Virtual reality is still not commonplace and even virtual reality does not create holograms or holograms on demand. 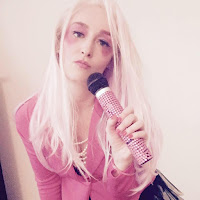 In the end, as I shopped for each piece I appreciated the fact I could create the costume of Jem from scratch and be able to wear it outside of it being a Halloween costume. I knew the answer to question of whether I was dressing up in a costume or not. I wasn't. With each piece I was not getting close to Halloween or it being a trick, I was getting close to my personal style, and being chic. ;D