A Sophisticate is Bullied 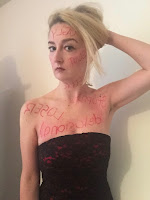 “He who has felt the deepest grief is best able to experience supreme happiness. We must have felt what it is to die... that we may appreciate the enjoyments of life. " Alexandre Dumas "The Count of Monte Cristo

Stupid. Loser. Blonde. Poor. Delusional. Insensitive.  These are only a small sampling of the derogatory words that I have heard about me. Ugly. Ugly was a word that was used to describe me for what seemed like everyday for an entire year.

Ironically after it stopped that was when  I got braces, had zits, and frizzy hair but the difference was I had friends. With my braces, ugly was what I was called by the boys I  liked or had a crush on until my braces came off. I still remember to this day a boy in Jr. High I liked calling me "An ugly piece of shit" to my face. He eventually got teased himself a few years later and when I ran into him later he was kind to me. When my appearance changed and  life got better the scars from the painful words still remained.

The bullying and derogatory words hurt because they were true. The difference? They may have described me at the time or at a moment in time but they did not and do not define me. When I was bullied I had a lot of  harsh truths to face about myself. I realized I was weak and inept. When that realization, I become strong and fearless.

"Bullying is changing judgment from a thought into an action." Sophisticate in the Suburbs

When I was 12, I was bullied, my father lost his job and whatever friends I thought I had left me. No extended family to console me and average to low grades, I hit a low point in my life.  No money, no friends, and no parents as they were depressed and focused on finding ways to make sure there was food on the table.

"Once you decide to take your own life, no one can ever tell you what to do again" Sophisticate in the Suburbs.

That low point ended up being the best thing that could have ever happened to me. A survival instinct kicked in when  I wanted to kill myself. Whatever the harshness of life threw at me for the rest of my life I now know with 100% certainty that I can handle it. I know I'm resilient enough to survive the worst that life can offer without dying or wanting to die.

Bullying is not okay.  The negative side was my anger from being bullied turned me into a bully at times. Hence why I started writing Sophisticate in the Suburbs so people could learn from my mistakes.

"Fear none, Respect all" Nas

My anger may have been channeled into being a bully but it also fueled my desire to succeed. It helped me distinguish respect from fear. Now I can face the worst and know that I can survive and live through it. The anger and sadness at times felt like it was choking me. So I channeled my anger through sports and karate. I channeled my sadness into writing poetry and drawing. I "shut-out" my problems and worry by studying. That was a good time to focus on my steries especially with my goal of getting into a good school.

"Bullying is in school. Harassment is in the workplace" Sophisticate in the Suburbs

In a perfect world, people wouldn't have to be bullied at school or on social media. In a perfect world being judged or harassed would end. Sadly, as an adult bullying doesn't end it just takes different forms.  In the workplace it becomes harassment.

A Sophisticate can't control whether bullying is done to her. She does have control over her reaction (A Sophisticate is Precious) and she can control whether she does it to other people. In the end, in the harsh reality of the 21st Century a Sophisticate may have negativity thrown at her, sometimes on a daily basis, but she never allows it to define her. ;D