A Sophisticate is Street Smart 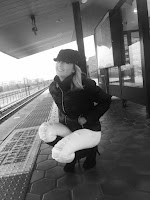 “Don't be afraid of being scared. To be afraid is a sign of common sense. Only complete idiots are not afraid of anything.”  Carlos Ruiz Zafón, 'The Angel's Game'

What are the qualifications for being street smart? Failing. Being put in a dangerous situation and not surviving aka being a victim. They say what doesn't kill you makes you stronger and that is the golden rule living or working in any city.

Like all learning, there is a curve. That curve can only be found or reached through experience. The first place I lived was in an apartment in the top floor of a house. The windows had bars on them because of the neighborhood. My mother would tell me of the wild dogs roaming the streets that we had to avoid while walking to the store.

My Jr. High school had a fight going on almost every day. Even after I was bullied, two girls randomly tried to pick a fist fight with me just because I looked at them the wrong way and one randomly threw a basketball at my head during gym class.

Forget the potential dangerous situations while dating, especially online, my next level of education came from working in DC. One day while riding the metro I was "disciplined". I came to learn that being "disciplined" is what they call it and no one who lives or works in DC can avoid it.  Over time all these instances made me a little "smarter" when it came to living and working in the city.

In the 21st Century with the dangers that exist for a female, even in small towns, a Sophisticate cannot afford not to be street smart. Read the headlines, no "type" of woman is exempt, no woman is safe.

A Sophisticate is educated but she is also has common sense as well as "city sense". What is the difference? There is book smart, "reading, writing, and having knowledge of facts or philosophy." Then, there is common sense. Common sense is when a Sophisticate is able to read between the lines of the facts the she is given. There is theory and reality.

"Common sense is the ability to have reasoning and understanding of practical application beyond what you are told or what facts you are given." Sophisticate in the Suburbs

Finally, there is "city sense" that are survival instincts applied to the city streets rather than the wilderness. City sense is being able to take what she has read about, understand the application, and finally rely on her intuition to take her to the next level of survival to being safe.

One street rule to remember, "Authority is in the eye of the beholder. Courage is power." Like in the animal kingdom and the wilderness, similar to animals people smell fear.