A Sophisticate Wears a Hat 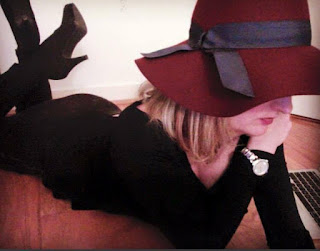 "And all your Fortunes lie under your Hat" John Oldman

For me I didn't understand the allure of wearing a hat until I bought my Derby Hat for the Devon Horse Show Ladies Hat Day (A Sophisticate Wears a Derby Hat). Every time I would wear a baseball hat in high school people would say "Take it off" and therefore  assumed hats were not for me.

My Derby Hat changed everything and it changed me. I realized that wearing a Hat was a gateway to something bigger. It was a gateway to something bigger that was found inside of me.  It was when I attended the Devon Horse Show Ladies Hat Day for the second year, that I made this discovery. During the event as I was wearing my new pink Lily Pulitzer dress I noticed the horsewomen who were performing in the exhibitions. They were wearing a riding hat and it was that hat I wanted to wear. It occurred to me that a hat meant more than just an accessory. Was it the riding hat I wanted to wear or was it a lifestyle or attitude that I wanted?

For a Sophisticate a Hat is a lifestyle (A Sophisticate is a Mad Hatter) and an attitude.  A Hat is something that when you put on you become someone else. It is a personal accessory that reflects one's passions, interest, personality, and style (Your Personal Style)

A Hat is similar to putting on a shield of armor. It helps prepare you mentality for whatever occasion or event (A Sophisticate is a Cowgirl). It protects you.  It protects you from the sun, the cold, and from revealing one's feelings.

A Hat is different from any other accessory because it reveals not only who you are but who you want to be. Unlike a watch or earrings which are "baubles" or trinkets, it means something. Only wearing an engagement or wedding ring symbolizes and means more to a Sophisticate than a Hat. A Sophisticate wears a Hat when she wants to project an image and an image that is extension of what is in her heart. In the end, a Sophisticate wears a Hat to represent and project to the world who she is and what she wants to become. ;D