Women of Ice and Fire 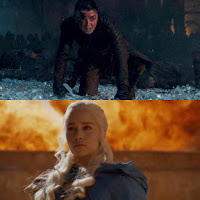 "Missandei: Valar Morghulis.
Daenerys Targaryen: Yes, all men must die but we are not men" George R.R. Martin "Game of Thrones"

When I first watched "Game of Thrones" I was immediately shocked and almost appalled about how the women in the story were treated. In my mind, I had to remember the time period. The time period of "Game of Thrones" was during Medieval times.  A semi barbaric time when women didn't have rights and men were Kings, Knights, and Soldiers vying for power.

All of a sudden, the women were in charge, those who were seducing, manipulating, and killing in addition to the men. In the Battle of Winterfell, Sansa Stark proved to be smarter than the men who were planning the battle and with a strategic move came in to save the day (Sansa arrives with the Knights of the Vale | Season 6 Episode 9 Battle of the Bastards). Fifty years ago, in Disney's "Sleeping Beauty" a woman needed to be saved from a Dragon. In the 21st Century a woman tamed a Dragon and saved a man.  Daenerys, a Queen, came North of the Wall to save her King riding on the back of a Dragon.  (Season 7 Episode 6: Beyond the Wall)


Finally, Arya a little girl who was the youngest of the Starks trained to give the gift of  death to others, in the end defeated death itself. (Arya Kills Night King -Death Scene | Game of Thrones Season 8 Episode 3).

The best part of "Game of Thrones" was the ambiguity and complexity it provided for each female character. Representative of today and always  of women and men, to not be judged or be "pigeonholed" as being just one thing.

Daenerys Targaryen: Leader: (Other roles: Queen, Villain, Mother, Sister, and Warrior) Revolutionary, Conqueror, and someone who dared defeat to achieve a purpose greater than herself. A woman with a mission, a deeper purpose, and someone whose advisors were her friends. On a whole, people followed her, people died for her, and people believed in her.

With all of her goodness came an evilness that stemmed from her emotions. Her biggest flaw was that she was ruled by her emotions. Her passion, her sadness, and her anger made her go too far when punishing her enemies. 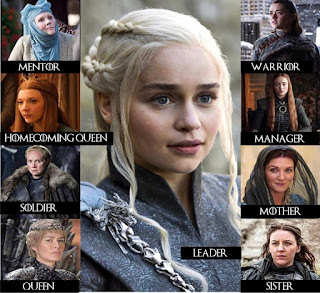 Cersei Lannister: Queen: (Other roles: Villain, Mother, Sister, and Mentor (to Sansa Stark): A woman familiar with regality and wealth. She how to make alliances, and understood the "way of the land"  or how to the "play the game" within Westeros. . She was not a politician she was someone who loved power and didn't mind blind allegiance.

She was also completely dedicated to her children. She loved her children above all else and they were the only people that humanized her besides her attachment to Jamie, her lover and her brother.

Sansa Stark: Manager: (Other roles: Queen and Sister): Loyal to the North. She was a Manager. Consistently focused on inventory, stores of grain for the people, how the breastplates and soldiers were armed. She focused only on opportunities for the North and potential threats. When it came to her people aka the other Houses in the North, she rewarded loyalty and worked only to unite her sphere of influence, the North. She was authoritative and when it came to battle focused on strategy and alliances within the North, to defend the North.

"I've known a great deal of clever men. I've outlived them all. You know how? I ignored them" Olenna Tyrell

Olenna Tyrell: Mentor: (Other roles: Queen (Queen of Thorns) and Mother): A woman who all other women turned for counsel and advice. Olenna when seeking information be-friended other women.  She cared about guiding her family especially her granddaughter, to obtain a powerful position in Westeros.

Yara Greyjoy: Sister: (Other roles: Queen of the Iron Islands, Warrior): Yara loved her family but was loyal to Theon Greyjoy. She tried to rescue her brother Theon Greyjoy from the evil Roose Bolton. She guided her brother, supported her brother, and they were partners. W She was also a fierce warrior and when attacked, did whatever she could to defend herself, her ship, and the people on it. The men under her command respected and were loyal to her. When her Uncle Euron married Cersei, she easily slipped into becoming the first female to rule the Iron Islands.

Margery Tyrell: Homecoming Queen: (Other roles: Other roles: Queen and Sister): Margery Tyrell was "Miss Popularity". If she were in high school today she would have been the "Queen B" aka the most popular girl in school. She was kind to the poor, she knew how to get men to love her, she cared for her appearance to lure men, and have women look up to her, like Sansa. She had politeness and was extremely deft at politics. She was also a loving sister, who tried to protect her brother. She considered her brother a partner when it furthering the Tyrell family.

Brianne of Tarth: Solider: (Other roles: Warrior): Brianne was the only female knight. She was strong of character and strong in battle. She was loyal and honorable to those she promised to defend. She was an "Oathkeeper" and kept her promises. She defended and avenged the people who killed the people she loved.  She was honest and kind, tough and fair. She also was a fierce warrior and defeated one of the strongest male warrior characters, Sandor Clegane otherwise known as "The Hound".

Arya: Warrior: (Other roles: Sister): Arya was a trained assassin. She knew that she was not meant to be a wife or a mother. Arya was a warrior who didn't fight in anyone's army. She was however loyal to her family. She was a Stark and was first and foremost willing to fight, not for the North but for the Starks.

Catelyn Stark: Mother: Catelyn Stark was a mother. She was a Mother first and foremost. She protected and loved with a fierceness unparalleled to any other character when it came to her children. She mentored and guided her children, as well as took care of them when they were sick.

A good book or story inspires people. Fiction is an entertaining way to help us re-evaulate our society and ourselves. In the end, "Game of Thrones" inspired me and millions of women to be more than what was expected. "Game of Thrones" helped women say "Fuck Tradition", and inspired women believe that are not defined by who we have to be, but rather we can re-define who we want to be.